The first product I’ll review on Racecarnolgy will be the MaxQ VeQtr system by MaxQData (www.maxqdata.com). This system is an interesting package for the Racecarnologist because it uses mostly off-the-shelf parts available to the average nerd to accomplish something that previously was only done by expensive, dedicated hardware.

The system I received came with the following:


Essentially, the concept is the GPS and the PC are connected through Bluetooth, you plug the webcams into the PC, start the software and hit the track. The software determines when you’re moving, starts the timer, then extrapolates power, braking and lateral G’s from the GPS data. The intention is, since EeePC has a solid-state drive, the goal is for it to be rugged enough to survive inside the race car while recording everything realtime, and that even saves a step from having to download the data to analyze it. The idea and the workflow is good in theory...but more on the practical side of this later.

What’s also nice from a do-it-yourself standpoint, is it’s possible to assemble the individual pieces yourself, GPS, laptop, webcams, etc, and buy a copy of the software to get them to all work together - MaxQ makes a license for their analysis and data capturing software available starting at $29 for basic 5Hz Bluetooth compatibility to $149 for 10Hz GPS unlimited data comparison and video overlay. The ability to mix and match pieces, particularly given many of us might have a laptop, some webcams or a Bluetooth GPS laying around might really be MaxQ’s secret super power. The whole $1300 system with 20Hz data is all-inclusive, but rivals the cost of entry level versions of the popular Race-Technology DL1 data logger, or the higher-end Race-Keeper SE Video Data System.

Here’s a sample video with the high-end 20Hz system mounted in the BTM Motorwerks BMW 328ti, during a practice session at Auto Club Speedway in Fontana:

One of the really nice parts of this system is the ability to add an external mic (again, don’t we all have a cheapo one just laying around?) or grab sound from one of the cameras. The main camera in this setup is mounted right in front of the rearview mirror, showing an excellent view and getting wind-free sound from up by the windshield. The second webcam is mounted by the passenger door to give a full view of the driver in action. Up to 4 cameras can be added to the system.

The MaxQ’s QView view of the data does a nice job of showing acceleration and braking in blue and red respectively, as well as wider rectangles for lateral Gs. It’s easy to see where I wimp out going into NASCAR T1 and lift slightly, as well as a few other areas I did well, or needed to work on - the more intense the color, the more dramatic the input.

The Chart software in general allowed for most of the standard comparisons one might want to see - comparing lap to lap or sector to sector with different runs, calculated hp, typical power curves, and in general is a completely serviceable way of analyzing data, with both typical plots for the data or the marching rectangles you see in the data overlay in the video.

While the MaxQ’s strengths do lie in its modularity, some of its downfalls come from that as well.

Workflow - While there are some newer systems available to mere mortals that can update more often or realtime, typically the engineer descends upon the returned car wtih his laptop, downloads the data and looks at it with the driver. The MaxQ system relies on its included netbook to perform all functions, and it’s not designed to copy the data to another system. This leaves the team to first mount and supply power to a netbook in the race car, then get to it quickly after a session. But instead of a larger screen and more processing power that one might have in a laptop suitable for the paddock, all analysis, data processing, and video processing is done on one tiny Asus Eeepc 901.

In fact, a number of issues arose around the use of this netbook as the system brain:

- The system would start recording automatically as designed when leaving the grid, but when stopping for a standing start, it would stop recording, freezing while saving the data recorded thus far. The system would sometimes realize it was running again and start up invariably just after the typical early-race shimozzle, sometimes not at all. There is a setting to force the system to wait for a period of inactivity after stopping (say 5 minutes) but in practice we couldn’t reliably get the system to handle standing starts. 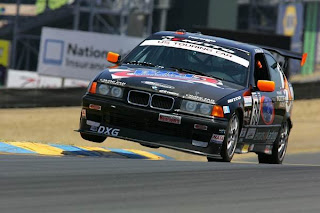 - While the Eeepc is rather rugged with its included 12GB SSD and withstood the odd bump and jiggle of racing, it did not withstand the heat of a typical race car (120+ degrees) very well. Hotter events in Sonoma and Fontana saw the system either shutdown and leave the team with a corrupt data / video file, or leave just a .asf file that would need some conversion before being useful. Certainly, a team could design a cooling system for the laptop in the car along with its mount and power needs (and we did have some success with this), but this is yet another detail that a small team would likely rather not deal with if necessary.

- Processing the video and data into the combined view seen above would have to be done on the Eeepc. While it was functional, there are certainly faster processors than the basic 1.6Ghz Atom for doing this. MaxQ could help this issue by allowing their software to be used on more than one PC at a time, but the release we tested only allowed one PC per copy.

- And lastly the UI. There are some environments where a simple friendly UI for the office just doesn’t quite cut it. A typical racecarnology reader might find Windows XP a very easy way to interact wtih a computer while sitting in the office, but as has become more obvious in the past few years, tablet based OSs, whether iOS, Android, WebOS or other are much more suitable to an outdoors, ‘I just want to punch a few buttons and have it work’ type of activity. The last thing that an engineer or crew chief needs to be doing when prepping the car for the track is booting up a PC, clicking icons, making sure USB and Bluetooth devices are connected and troubleshooting any of that.

The original versions of MaxQ did apparently run on Windows Mobile 6.x, but even Microsoft won’t admit to that OS anymore for the same reason - an epic fail in terms of a mobile UI. Many of the UI elements in the QView software could likely be adapted to a simple touch interface on, say, a 7” or 9” tablet. I don’t know about the reliability of such a device in a hot car, but it would be much better way to interact with the data, certainly. Perhaps an added benefit there would be mounting such a device in a way to provide dashboard-like feedback, laptimes, etc.

Our engineer noticed some discrepancies with the measured HP values in a few different situations - it appeared the MaxQ did not take elevation changes into account when measuring horsepower. So - looking at max HP on the run out of the carousel up to T7 at Sears Point looks a bit different than the front straightaway at Thunderhill, but Ed at MaxQ pointed out comparisons like this are still valuable day to day, if not track to track.

Another issue we weren’t able to confirm, running with USTCC (who use the system to police max HP on cars) the naturally aspirated cars’ HP values appeared to read high compared to the forced induction ones when we ran at Miller Motorsports Park, which is 4400ft elevation. The telling thing was nearly the entire field was impounded and run on a dyno - it was the two naturally aspirated cars that appeared to read high by comparison. Once we returned to Buttonwillow the following month, the readings followed the same distributions we’d seen previously at other near-sea level tracks, such a Sears Point and Thunderhill.

Neither accuracy issue are particularly deal-breakers, particularly with an affordable system, but worth noting.

Lastly, it’s worth noting that the Chart software takes video inputs via USB (up to 4 cameras) and external GPS inputs via Bluetooth, but no additional channels of data appear to be supported. For the processing limitations related above, we tested with a maximum of two video cameras.

Overall, the MaxQ set of products are a nice way to begin analyzing data that a beginning or amateur racer might generate with his or her car, looking for trends, and beginning the process of visualizing in data the hundreds of factors that lead to a fast lap time. Given some of the limitations of the system, it’s likely going to suit a driver or team that have more time and ingenuity than outright cash, and as such could be a valuable part of a low-cost system. But before spending more than a few hundred dollars on the various components of the system, the up and coming racer that will eventually want more should definitely investigate the systems that begin in the $1200 range and see if it make more sense to buy the entire VeQtr ™ system from MaxQ or go with the entry level offerings of a higher-end manufacturer.

Picture by Head On Photos, driver Andy Chittum
Posted by A Chittum at 1:57 PM 1 comment: