A healthy field of 14 teams returned to the delightful Sonoma Raceway May 18th and 19th for round 3 of the NASA Norcal Spec e30 championship.  While the May event at Sonoma typically offers some of the most beautiful blue skies of the year, the forecast looked darker and more gloomy the closer the weekend came.  Teams readied their full treaded Toyo RA-1s instead of the speedy slick RRs in use since 2013.

Usually things don't start really getting exciting until qualifying, but breaking all the rules, Nick Theimann broke a brake line in warmup entering T11, and gave the barrels at the apex of the turn a severe workout with the front of his car.  Undaunted, Nick began repairs immediately with a goal of making the race later that afternoon.

While the morning had been dry, as the cars sat on the grid to go out for qualifying, a light rain began, not causing major puddles yet, but significantly reducing grip around the 12 turn track.  Most of the field settled in with lap times a good 30 seconds slower than morning warmup, but two frontrunners emerged - Chris Belieu and Andy Chittum.  Working in and out of slower traffic, the two e30s started dropping 2 seconds a lap each lap, with Chittum ahead on the track, and Belieu catching up.   Chittum turned a 2:35, Blieu a 2:34.  Chittum got ahead with a 2:32 to Belieu's repeat 2:34, then Chittum finally dropping to a 2:31.028, and Belieu answering with a 2:31.00 as both cars hit the checkered flag on slicks in the rain.

With Belieu unable to make the start for Race 1, Chittum started on pole position, with Sylas Mongomery taking over Joe Nagy's car, and JP Cadoux, a functional but not pretty Nick Theimann, Ben Winter, and James Gouveia filling out the top 5.  With the race starting in very wet conditions, everyone opted for wet tires this time, and they would need them.

On the start, Chittum and Montgomery launched well, but JP Cadoux jumped from P3 up the inside of T1, and took the grippy wet outside line entering T2.  Unfortunately, a sizable pond had appeared on the outside exit of T2 which sent Cadoux spinning slowly yet inexorably off to the inside of T2's exit giving Chittum the lead and slowing Montgomery who was poised to take advantage of any slip ups at the front.

On lap 2, Mongomery was able to take advantage coming out of the Carousel T6, and make an outside pass on Chittum through T7.  At the same lap, the race went full course yellow to rescue a group of Miatas that had exited the track in turn 10.

A lap or two later, with the accident cleaned up, a column of Miatas and e30s slowly made their way out of T8, and both Chittum and Montgomery began looking for the green flag through the downpour across the track, but James Gouveia had the advantage with a proper spotter, and roared past the two to the front before they had a chance to react.

As the three charged into a T11 barely visible through the rain and spray, Theimann's newly resurrected car charged into view, and for the next two laps all 4 cars raced side by side, maximum attack, maximum downpour.   Gouveia was able to hold off the group for quite some time, but finally, Mongomery was able to make a pass stick by getting inside entering T6, holding station side by side all the way up to T7, and taking the long way around, and finally making the pass stick going into T8.  This gave Theimann room to attack Gouveia a few turns later, but he slightly overcooked a wet T1, sliding slowly off into the mud.  Chittum took advantage of the mayhem to overlap Gouveia in T2 and T3, and finally asserted position going into T4.


Free to chase after the departed Montgomery, now several seconds ahead Chittum charged on, only to suffer from a broken windshield wiper, which somewhat tempered his ability to attack...and to see.  A series of on and off yellow flags between the other cars on the track effectively froze the action until the end of the race with Montgomery in 1st, Chittum second, Gouveia 3rd, Ben Winter 4th, and Daniel Hayward moving up to 5th.

Rain continued steadily through Sunday, and while Saturday morning there was some question about the correct tire, nearly everyone was convinced the 10:10am start for Race 2 that wet tires were the way to go, even though it had stopped raining some hours before the race.

The standing start lined up with Nagy on pole having taken over for his teammate Sylas Montgomery, Chittum on the front row, then Dave Brown in for his teammate James Gouveia, Ben Winter and Daniel Hayward.  At the drop of the flag, Chittum managed to get a very good start, gapping Nagy and the rest of the field.  Nick Theimann also got a good launch, and after just a few laps of battling, Chittum led the way with Brown and Theimann hot on his heels.

Nature threw strategy for a loop again, as the drivers rolled out, it seemed the track had dried out more than most had thought, and Dave Brown's decision to go with slick tires seemed to be a master move in the first few laps of the race, slowly catching Chittum as the track continued to dry.

However, 3 laps into the race, a light rain began, and by 5 laps in had started to puddle up the previously-drying track.  Brown hammered on, and in fact had run faster than Chittum for every lap except the first one, but succumbed first to the attack from a charging Theimann, 5 laps in and by 8 laps in, Chittum managed to pull his lap times down 2 seconds beyond the rest of the field in the pouring rain through to the end of the race.

Last race of the weekend also started on a well-puddled track, a very muddy T6, lakes entering T8, exiting T10, and in the middle of T12.  Chittum lined up on pole, with Thiemann on the front row, Brown and a resurging Chris Belieu row 2, and Forest Cook / Bryan Shiflett on row 3.

The final flag of the weekend dropped, and Chittum again got a great start and out of T2 without contention.  Theimann and Brown charged ahead, but a few laps in Brown's e30 was pushed out wide off T6 by out of class contact, and Theimann got ahead.  Coming from further back and also showing his rain racing prowess, Chris Belieu made his way around and was in P2 by the time another full course yellow was called.  The pack was bunched up costing Chittum an 11 second lead, but as the green fell again, Chittum pulled away again with Belieu, Theimann, Winter, and Brown making up the top 5 at the end.

NASA Norcal Spec e30 will return June 15th and 16th, back at Sonoma Raceway at Sears Point.  Certainly many of the drivers will be hoping for drier conditions, while a very few will not. 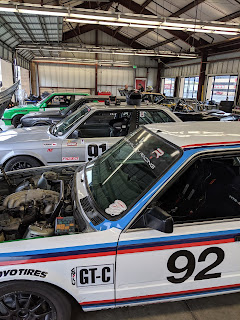