The Dark Horse Rides
It's been a few years that Larry Moore took his Spec e46 race car beyond the spec class rules to maximize it for endurance racing.  I'd been aware of the car and his dastardly plans for some time, but it wasn't until earlier in 2020 that I happened to stop by the shop where the magic was happening, so to speak, and see what incredible lengths he'd gone to, and how far his madness dedication to that idea had progressed.  Even further, he'd managed to seduce Tony Dominici to join in with his similar e46 race car to make it a two car endurance team - one wrapped black, one white. 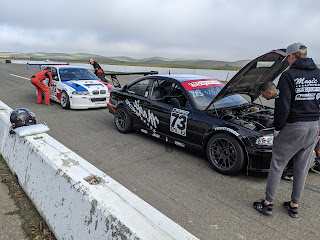 While I had a full ticket of racing in 2020 planned myself, it so happened a number of different events came together that led me to find a place on the team for the National Auto Sport's halo Western States Endurance Championship event: The 25 Hours of Thunderhill.
December 3rd: Qualifying
After some discussion and review of our testing results from a few weeks prior, I was selected to drive 4th of the 5 drivers, and our leadoff driver Ian Barberi would be qualifying.  The rest of the E2 class was composed of e46s in NASA Spec e45 form or something close, ND and NC Mazda MX5s and a few other cars.  From our testing, we knew the entire team should be able to comfortably put down laps close to record spec e46 pace, but it was a surprise when Frasun Racing's e46 set down a speedy 2:00.6 lap to take 2nd behind the #72 Moorewood Creative White Car's smoking fast 1.58.0.  Ian's 2:01.5 was still 2 seconds free of the rest of the field, but given 25 hours of racing to come, nearly anything could happen. 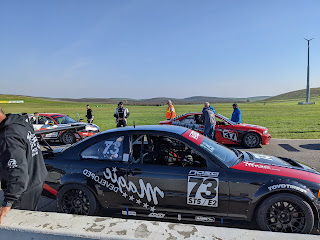 Of course in the midst of this, the fog began rolling back in between T2 and T4, and I wondered if we'd be parking it again before the night was up, but after several laps the fog fairies headed for bed for good, and left us to race under a relatively clear night sky.
Even in the darkest hours, between our crew chief Craig Evans and our spotter Milas Mills we got a great rhythm down calling out hazards, slow cars, fast cars and everything in between.  By this time things were warm and I was really enjoying myself - I have to really hand it to Milas who was sitting out on a hillside somewhere probably freezing his butt off.
The pace continued after a fuel stop and as the I motored toward the end of my second stint, I realized the sky had turned from black to grey, and finally a gorgeous orange sunrise and a beautiful clear morning giving no sign weather would be any hindrance to racing for the rest of the day.
I swapped out to the next driver and hopped back over the pit wall elated - partly excitement partly working on moving my brain back from driving to walking on solid earth.
Next off in the car was Paul Whiting - final driver in our lineup, who was a deeply experienced racer with several pro races to his credit.  While I availed myself of a stack of pancakes from the Thunderhill grill, he set off at a blistering pace in the early morning and set blazing fast times for three full consecutive stints, close to 3 and a half hours.  I'd kicked us back into a place where we could end up anywhere between 3rd to fifth in our class, but Paul put us right back into the thick of the competition. 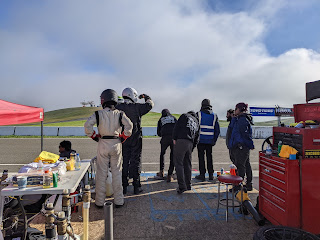 Sometime during his stint as well, our main competition the Frasun Racing e46 suffered brake failure heading into T10, and took some time to get towed off, replace the brakes, repair some body damage from nerfing the wall, and rejoin the fray.  That left yet another e46 run by Legacy Motorwerks in our way for 2nd place.  As it turned out, they were running a strategy on harder than typical R compound tires with the intention of skipping tire changes to shorten their pit stops, but such was the speed of the Black Car combined with the pro level pit stops and Paul's triple stinting that by early afternoon Sunday, we'd pulled ahead into 2nd place.
At that point, with our sister car ahead about 3 laps, the competition unable to match our pace, and with Paul and later Ed pulling through the field, we got the word to take things as easy as possible and take absolutely zero chances.  In fact as it worked out, as Ed finished up his last stint, and I was prepping to do one final stint to take us to the finish line, Chief Craig took me aside.
"Okay - you're not to use third gear.  Sounds like some transmission problems."   He said.
Another interesting challenge - Gearing on the Moorewood cars didn't seem to be too different from a typical e46, which made much of the lap in 4th and 5th gear - I'd even done 4th on purpose a few times rolling through T14 and 15, but pulling from T11, the slowest turn on the track, taken about 45mph  felt painfully slow.  Nonetheless, I took over and cruised the final stint turning similar times to our competition in spite of the handicap.
Running through the final pit stop would leave us with about 30 minutes of leftover time so given the team didn't want to leave anything to chance, I was to remain in the car and bring it across the line for the end.
Really, as well, having done primarily sprint racing for the past 20 years or so, there was never a moment while racing with Moorewood that the whole aspect and importance of a racing team was in doubt.  Justin, Tony, Larry and many others had spent untold hours pouring over the rules to maximize every possible way an E2 / NASA ST5 car could be enhanced for speed, reliability, and drivability.  Even longer, I suppose actually wrenching on the cars to make those changes work.  The crew having spent entire weekends practicing, pit stops on the Black car were flawless, and aside from some inopportune fog, we'd have been in a perfect position to win our class.   Same could be said of the White car, as a minor fueling rig malfunction put them back...just not quite as far.  No less than 25 team members contributed to the success from fresh clean windshields to race strategy to truly delicious freshly baked cookies.
It was a challenge driving a cold car in the middle of the night, sure...but it was easy considering all the hard work the team put in to get us drivers in a place to do it.
As we came to the end of the last few laps, we synchronized where the cars were on the track and did a lo-speed cruise by the Thunderhill main straight in a picture perfect 1-2 finish.  As is NASA tradition, the crews gather on the hot pit wall and cheer on every car that's able to make it to the end of the journey.  It was epic driving the car across the line cheering too - Team Moorewood Creative - this one's for you! 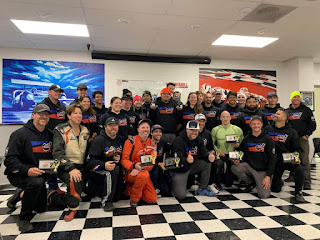 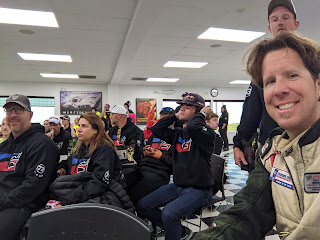