Sound Engineering vs. The Corkscrew


At this weekend's United States Touring Car race at Mazda Laguna Seca every car in the field sported new appendages.  In previous years USTCC had run on one of the few unrestricted sound days at the lovely facility, but this year sharing the track with SPEEDSF, a whisper-quiet 92Db was the rule.  If you fail sound once, you're done for the session.  Fail again, pack up and head home.

There's a number of reasons behind these rules, and if you're curious about their genesis at Laguna Secca, then I'd recommend listening to Gill Campbell's interview in Episode 17 of Dinner with Racers.  This post won't discuss the why.

What we will explore is the science, engineering, craftsmanship and, dare we say, art behind the protuberances behind the cars that kept them quiet along the unique 2.214 mile course in our season opener this year. 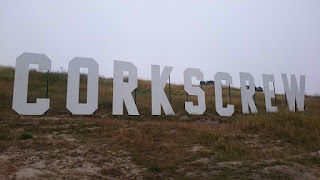 We begin with none other than the #85 Minideck Motorsports / BTM Motorwerks MINI Cooper S driven by yours truly. 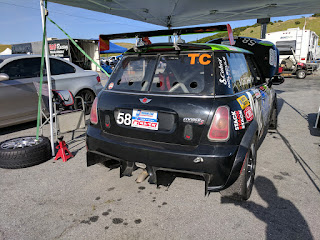 In the past, this car has been a lot louder, yet for this event, Rich Petersen, the car's owner and Chief Tinkerer had fortified the new stainless steel muffler system some unknown amount of 'special high-tech packing'.  And proving size indeed does not matter, the car stayed clear of the dreaded meatball all weekend. 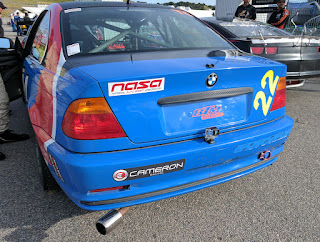 Reportedly made from 'A Mustang muffler with MINI tip welded on the end' Mike's car was so quiet, hardly anyone could event hear it go by.  The whisper smooth I6 didn't suffer much as Mike led at least half of the race and finished a close second.

Tom Milburn's #14 Bay Area Drafting RSX ended up with one of the more shiny and high-tech noise deflectors. 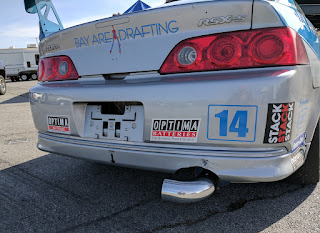 Reportedly, he'd been worried about both intake and exhaust noise, and got a strike from his peppy Honda exhaust note.  A passing wisenheimer quipped he should put an intake elbow on his exhaust pipe to pass sound.   That's exactly what he did, and he ran trouble-free the rest of the weekend. 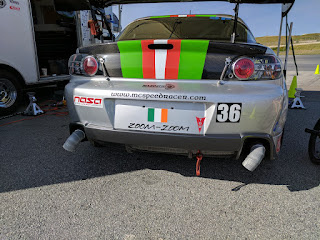 And he went right to the off-the-shelf for his sound deflectors.  No irony that it rained during the final race, and drainpipe was his weapon of choice.

Patrick Cho's #88 Speed SF Nissan 350Z has been a regular at the front of the TC field. 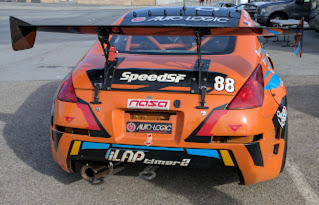 And he played the part well, with the longest shiniest cannon style muffler in the field.  V6's always sound a bit odd to me personally, but this bit of kit stayed under sound and ran some very fast qualifying times to boot. 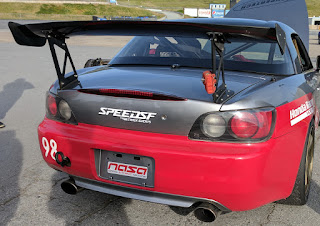 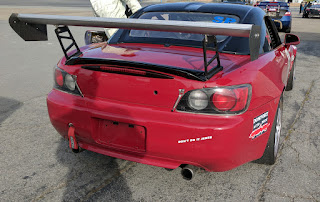 Bone stock.  Considering the gains from a typical aftermarket S2000 Exhaust (not much) and the sound restrictions, this was a wise move.  Even wiser once Andrie took the checkered flag just a few feet ahead of Mike Shawhan's Mustang-mufflered BMW. 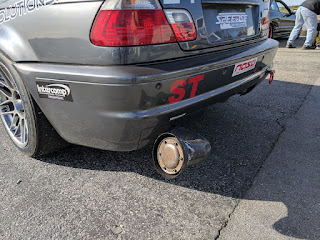 At some point during the weekend, the M3 had issues which were thought to have been caused by the increased backpressure, but they were later attributed to a loose hose up front.  Once repaired, George proved to be speedy and sound great, handily winning the ST class.

Daniel Akhromtsev's #16 Red Star Racing BMW M3 has run at the front of the GT field for some time now. 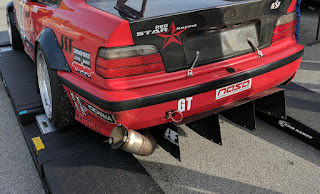 His offset elbow featured an additional sound deflector which looked like an up-side down smokehouse chimney.  Minus the bacon of course.  Mmm bacon. 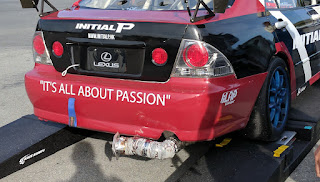 While effective on the race track, it reminded me of the limb of Chaos Eater from Dark Souls.  Late in the race, in fact, the exhaust took a hit in hard-fought action, and the speedy Lexus had to retire from the race for exceeding sound once it was broken.


And Finally, the King of Marching to His Own Drummer, Pete Bovenberg's #2 MBO Motorsports Honda Civic. 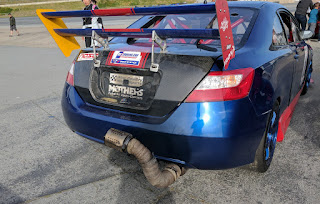 Pete's tailpipe actually began shorter earlier in the event, was meatballed, then grew steadily until in priapic fashion it finally reached its full potential.  Multiple bends?  Check.  Many yards of heat resistant / sound deadening wrap? Check!  A disturbing sound diffusing tip that resembles a shotgun pierced coffee can, yet appears to be able to light the whole back of the car on fire? Heck yeah! Check!


United States Touring Car will return to action May 20-21 at Auto Club Speedway in Fontana, where sadly, sound is completely unrestricted.  We'll be keeping an eye out for more bits of technology enhancing the racing action.
Posted by A Chittum at 11:10 PM No comments: