Last weekend USTCC Round 4 took place at the Utah Motorsport Campus, and I was really excited.  Not only would I be back in Rich Petersen's outstanding MINI, but the car was in really great shape after a promising podium at Laguna Seca in Round 2, and a dangit-could-have-passed-that-guy result at Sears Point in round 3. 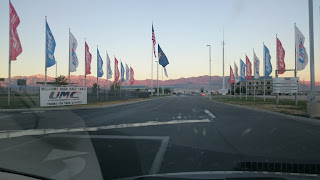 The MINI had been to the engine doctor, tuned, re-tuned, had a minor miss and an ever so slight vacuum leak fixed, and looked to be really competitive compared to the rest of the USTCC TC field.  The other more powerful heavy RWD competitors were sure to be good on the long drag race from a standing start at UMC's 3500ft front straight, but fresh optimal tuning, forced induction, a base elevation of over 4000ft, previous experience on the track and the possibilities looked quite good for the little car.

In fact, morning practice on Friday went well - in the midst of a busyish NASA Utah practice session, we dropped down to 2:14s during those first few re-discovery laps.  Given the allowed mods and power to weight ratio for the TC class, this looked pretty promising for the following day's race. 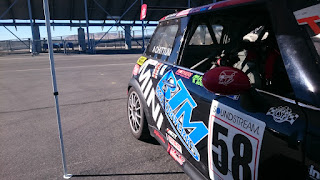 But in the second practice session, the car had difficulty starting, and didn't want to stay running.  A problem with an improperly mounted tire brought the car right into the pits, and then a small coolant leak surfaced.

After some diagnostics in the paddock, it became apparent the small coolant leak had been letting just enough water out of the engine for just long enough to not set off any major bells or whistles, but to cause the engine some serious problems.  The old 'turn it over with a spark plug out' test produced a perfect geyser of clear coolant right out of the cylinder 1 spark plug hole.  Not good.  Need a new head gasket.  At least. 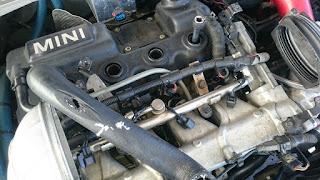 After a few minutes of consideration (we'd come a long way, the field was reduced in size, some other cars had issues as well, good opportunity to score points) Rich began the intricate process of removing the head gasket, and I scoured every auto parts store from Tooele to Ogden looking for the right head gasket.  If the car could be just patched up to finish half the laps of the race, we could salvage some of the trip.

After locating the part in Napa Auto Parts of Salt Lake City, I hopped into my rent-a-Prius and motored away, made the 74 mile round trip, and returned to the final unveiling of the head as it came off the block.

Brad from BTM Motorwerks applied his expert eye to the cleaned up head, and few things became apparent at that point.

1. There was about an 8 thousandths gap between two cylinders.
2. The valves weren't sealing properly in their seats anymore.
3. The MINI would not be racing this weekend, at least not with that head. 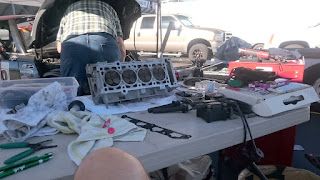 
There are a number of top notch motorsports shops and race teams headquartered at the world class UMC facility, and between talking to anyone that would listed to me, and touring the paddock for anything that would remotely fit into the USTCC Touring Car class (this discounted the race-prepped Lamborghini Rich found for rent) three reasonable options:

The Boxter seemed like the best option, but there was some question as to how close to legal I could get it in the short time I had before the Saturday race.  The 350z owner quoted me $3000 plus tires rental fee.  =:-o

Pass the Nachos - we're having a Fiesta! 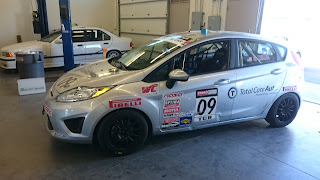 
The first thing you notice while sitting in a grid of legit touring cars making between 220 to 300+ hp at the wheels is how competitively quiet a TCB car is.  I was also glad I'd chatted with the driver of the USTCC Sportsman class e36M3 that was gridded behind me, so he was aware I would be doing my best, but proceeding from my standing start in my 120hp Fiesta, it would not be a breathtaking procedure to say the least.

I did manage to keep the back of the field in touch for the first lap, but once the field hit UMC's main straight, they basically disappeared, and I set about the business of proceeding as fast as I could manage.  One area the Fiesta has going for it is a really outstanding braking system.  But I quickly found in my first few turns that if you used more than about 50% of it for more than a fraction of a second, then you'd slowed down way too much.

Sometime later, the GT and Super Touring leaders came through at what seemed like FA-18 passing a pigeon speeds, and finally the TC class cars.  BTM Motorwerks' Mike Shawhan's e46 328 was closely followed by Speed SF's Patrick Chio's 350z and Gogo Gear's Gary Sheehan's Hyundai Genesis.  Looked like if I could just keep it on the track for a few more laps, I'd end up a respectable 4th.

But a few turns later, I passed two huge clouds of dust, one on each side of the track - I couldn't tell at the time, but I'm told the Hyundai was in one of them.  I came around for a white flag, finished the race, and learned I'd managed to squeeze out a podium from a weekend where we'd completely lost our head.

I can't thank the fine staff of NASA Utah, Dave Kizerian for helping me scope out rental cars and especially Cheri Miller for loaning me a great little car...that went just fast enough.

USTCC will be back at Sonma Raceway at Sears Point Oct 29th and 30th - stay tuned to USTCC.COM and FinalDrive.tv for all the hard charging action.
Posted by A Chittum at 12:37 AM 1 comment: