"Andy, I need your help.  I bought a car yesterday, super cheap - it hasn't be run in a over a decade, and I want it to race this weekend."

On the one hand, something every race driver wants to hear - someone needs them to drive their car.  On the other, so many questions.  Are there tires?  Condition of the shocks?  The engine works?  Setup?  Testing?  By the way, what kind of car is it anyway?

The car was a 5th gen Honda Civic equipped with a B18C of uncertain build.  Shocks had been rebuilt by the prior owner recently, the engine had started when they tried it, they had some old Hankook F200s laying around and all the rest would be taken care of at the track Saturday before the race Sunday.

This car turned out to be the newest to race for USTCC Team Gogogear.com's stable, which includes other cars spread from the Sportsman class, where the Civic fit in, to the Super Touring class featuring a gorgeous S54 equipped BMW e90 driven by Lary Bani.  In fact, the team had another similar Civic painted in the distinctive team yellow-orange to be driven by Reza Arsham, which became my template for working things up, and figuring out what the car liked. 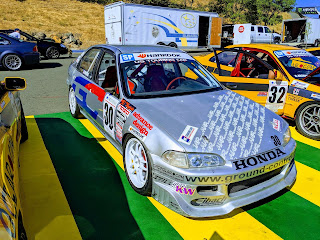 Saturday, with a reduced testing schedule, there was just time enough for the car's new owner Ali Arsham to jump into the car and give it a quick once over, as well as have to team update a few safety items before Sunday.

Sunday dawned with perfect spring Sonoma Raceway Weather, sunny, 80 degrees and a light breeze.  I slid into the Honda, and headed out for a warmup.  The one minor issue noted in the shakedown Saturday was a slight tendency for the car to overheat, so with one eye on the temp gauge, I worked on figuring out the car.

After two laps, I'd started to drop my times pretty quickly - the little car had tons of stick, and could do more each lap.  The newly rebuilt shocks handled the uneven pavement well in T1.  T3 was a light dance.  T6 pulled my cheeks sideways and the chicane for T8 was well balanced all the way through.  Even the (not my favorite) FIA configuration chicane in T9 worked better than I'd have thought for a smaller car.

On my 3rd time across the line I got a signal to pit, so I came in, the GogoGear Guys did the tires, and we pulled in to look at the data from the run.

To combat the unusual water temperature, the GogoGear team put together a makeshift shroud to force more cool air through the radiator.  I discussed tire pressures and setup with Reza again, and we settled on the final plans for qualifying and the race. 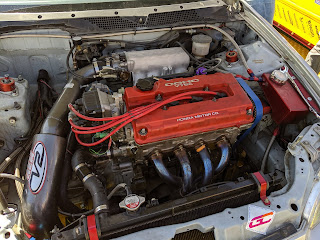 Qualifying - If Ida Had One More Lap

For qualifying late morning the Gogogear team put me on scrubbed slicks, and I found it a challenge to get the big Hankook F200 race slicks warmed up on the 2300lb car.  After some major scrubbing, I got a decent lap in for the bank, and looked to really give it the beans, hoping I had enough thermal runway to make it a good one.  I had put everything I'd learned in the morning together and put a good lap together, but I got the signal to pit again, and had to abort the lap.

The setup on the car looked good, but there was still some tinkering to be done so we came in and started prepping for the race.  Edgar Lau's #9 BMW 330i had some legs on the field with a roughly 3 second advantage, but the next 4 of us were separated by a half second, putting me inside second row to start.

At 1:10 PM the entire USTCC field took a green flag, and 22 cars left stripes of sweet Hankook rubber en route to a chaotic blast through Sears Point's T1.  While Lau quickly checked out, the rest of the SP field upended on the first lap.  I figured out a pretty good standing launch procedure and moved up, while both Bovenberg and Gardner had trouble getting away.  Reza Arsham made a great start up through T2 and made another pass into T5, but I managed to get around him on the mid-exit of T6, and come across the line in 2nd place on the first lap. 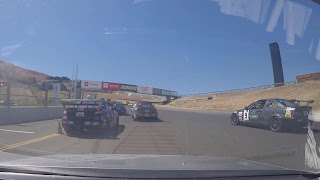 The battle for 2nd settled in Chittum - Arsham - Bovenberg - Milbourn - Gardner for the first 5 laps or so, and I was able to manage the pace, pushing harder for a lap, gaining a gap on the field, then taking it a little easier for a bit.  Coming out of T9 on lap 5 I was a little overly easy just to get the engine temperature down, and Reza managed to overlap me into 11.  I didn't protest too hard with my teammate, and we charged up into T2 together.

As I unwound the steering wheel for T2, suddenly, there was an impact on the back of the car, the car was pitched to the left, and I got a lovely view of the pedestrian bridge out the windshield as I slid sideways up the hill at about 80 mph.  It's always interesting to see what comes to mind in such a situation like this, and I recall simply - 'dontrollover, dontrollover, dontrollover' until a deluge of dirt and grass blasted through the passenger side windows and the car headed for the tire barrier.  The tires didn't catch in the dirt, and I came to an easy rest not too far from the tire barrier.  Barely missing a beat, I got the car back in gear and took off up T3, but there was a lot of dirt and grass built up, and it took a few slow turns to get the car to work normally again.

Awesome get punted off video!

By that time, the water temperature was right at the upper end of workable, so my best choice was to pull it in, and save the car rather than trying to chase down the field and risk blowing the engine. 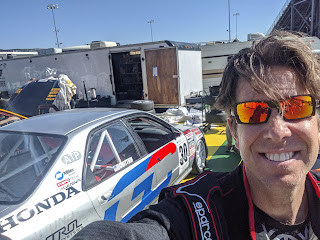 Later, Ali expressed his appreciation that the car showed good speed in the class, and ran as high as second place.  It seemed like he was just about an upgraded radiator away from a very competitive car.  Maybe even at the next USTCC event, October 26 and 27th with NASA.  Maybe I'll even get another phone call. 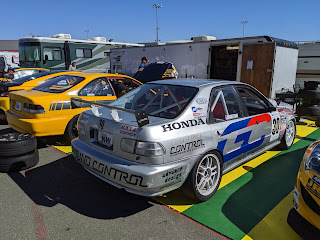