The NASA Norcal Spec e30 Championship blasted into Sonoma Raceway October 26th and 27th for a no hold barred double points smackdown of a weekend, consisting of qualifying and three races with the usual suspects, as well as a few ringers that showed up to try to take a win away from the usual suspects.

In the morning meeting, series organizer Nick Theimann pointed out that Andy Chittum was the points leader for the season, leading by a formidable 117 points, but with 600 on tap for the double points weekend, one misstep could shake up the order significantly.  Just to prove his point, Thiemann, in second position for the season then went out for qualifying and set a fast 1:56.8 lap on the twisty technical 2.52 mile course a good 8 tenths faster than previous round winner Chittum.

But it was veteran Spec e30 racer Scott Clough that did Nick one better with a 1.56.3 that initially set the pace until local race hero Tim Barber stepped in with a legitimately fast 1.56.0 to take pole position.  Brian Shiflett, and Forrest Cook filled out the top 6, and the rest of the field fell within the 1.58s, just behind the leaders. 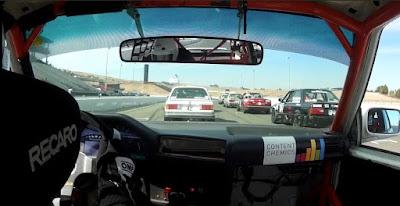 At the drop of the green the roared off the line without a single bauble on the standing start, but the right hand side of the track seemed to be slightly faster, with Clough getting the jump on Barber and Chittum just edging ahead of Theimann.  By the time the field poured into T4, the side by side had worked its way out and they filed into T6 in that order.

But Chittum missed a shift coming out of T6, allowing Theimann to come motoring by, and the rest of the field right on his bumper into T7.  Chittum got his act back together narrowly got out of the reach of the field, and chased down Theimann, while Barber took advantage of his speed advantage to sneak back by Clough with an over-under into T7 and making it stick in 8.  By the end of the first lap, the field had mostly settled down, except for sometime Spec e30 hotshoe Aristotle Balogh who had missed qualifying and making up nearly half the field on the first two laps.

While Barber slowly pulled away from Clough, Chittum caught up to Theimann and began pondering how he could make it by the fast #21 car.  Initially, Theimann proved difficult to figure out, but with Balogh free of the rest of the field, and starting to bridge a 6 second gap up to 4th place, Chittum began to push harder.

With a fast run through 10, Chittum made it through 11 just inches from Theimann's bumper drafted down the front straight, then cut inside, overlapping in T1 and up into T2.  But Theimann still held an advantage, and was able to stay ahead in T3.  Next lap Chittum did the same thing, but this time doubling up in T2, and was able to get up the inside of the exit of T3, making the pass stick.  Slowly, Chittum was able to pull ahead, just as Balogh reached the battle.

With Barber and Clough checked out, Chittum got a good gap, and was able to hold it as Balogh made his way around Theimann.  The two held even for a few laps, but with lapped traffic, Balogh was able to catch Chittum and make it past just before the end of the race.

With a hard fought race on a oddly greasy and difficult track the day before, cooler temperatures were forecast, but higher winds, which were sure to produce the battle of the year.  Unfortunately, due to nearby forest fires, NASA was unable to secure Emergency Ambulances for the Sunday event, so they were forced to cancel the event.

With a 117 point lead going into the final weekend, Chittum then retained the lead at the end, and pending official results becomes the 2019 NASA Norcal Champion.  This is Chittum's 3rd Championship, but 1st as a solo driver, previously teaming up as Team BTM Motorwerks and winning in 2011 and 2012.  Nick Theimann, while leading for much of the year held on to second place overall, and Forest Cook was able to make up enough points on JP Cadoux in the final race to hold on to third. 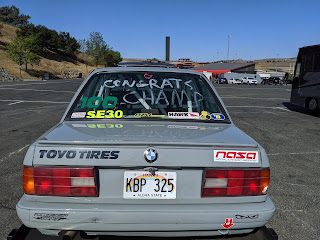